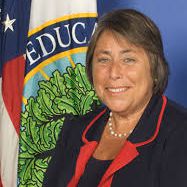 Martha J. Kanter is Distinguished Visiting Professor of Higher Education and Senior Fellow at New York University. She also directs the College Promise Campaign. She served as Under Secretary of Education from 2009 through 2013. Prior to that, she held numerous roles as an educator and leader, most recently as Chancellor of the Foothill-De Anza Community College District, one of the largest community college districts in the nation. She received her undergraduate degree from Brandeis University, a Master’s from Harvard University, and a doctorate from the University of San Francisco.